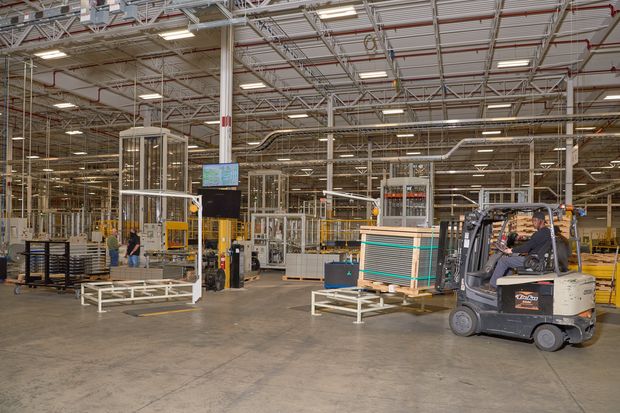 WASHINGTON – The largest US solar panel maker announced on Wednesday it will invest $ 680 million in a new factory in Ohio, one of the biggest bets on domestic solar production since China began dominating the industry a decade ago.

based in Tempe, Arizona, plans to begin construction after obtaining required permits and local incentives, and aims to open the facility in early 2023.

The factory near Toledo, which would be the company’s third in Ohio, is expected to initially produce enough solar panels to produce 3 gigawatts of electricity annually, or enough to power approximately 570,000 homes.

Taken together, the three plants would produce modules that could generate 6 gigawatts of electricity annually by 2025, or just over half of all solar modules the company estimates will be produced annually in the U.S. by then, said the company’s CEO, Mark Widmar.

Mr Widmar said the investment reflected the growth of the American market and what he saw as the bipartisan government commitment to boost domestic alternative energy production.

First Solar is the largest US manufacturer of solar modules.

The pandemic heightened concerns about “over-reliance on a single country” for imports in industries deemed essential, Widmar said.

President Biden said he wants to make the U.S. electricity grid carbon-free by 2035 and will try to give a boost to domestic industry through the federal government’s purchase of American-made equipment.

“The government is committed to its ambitious ‘Buy American’ goals and the development of American products, including for solar technologies,” said a spokeswoman for the Office of Management and Budget of the White House.

The Department of Energy said the investment was “the perfect embodiment of President Biden’s strategy to build domestic manufacturing and supply chains for critical industries.”

Chinese companies have dominated the solar market since about 2011, displacing US, European and Asian competitors who had a head start but did not have extensive government support and funding from Beijing and Chinese local governments.

The fierce Chinese competition depressed the prices for solar modules and made solar power competitive with natural gas. Some economists say this has been a boon for consumers.

What are your prospects for the US solar industry? Join the conversation below.

“It looks like it stands between solar manufacturers and people,” said Nicholas Bloom, an economist at Stanford University.

First Solar, one of the few American solar companies that could survive, specializes in the construction of panels for large-scale systems in the desert. Chinese companies and others also built panels for the housing market.

Some environmental groups have objections to the megaprojects, say they harm desert ecology.

With proper planning, the projects can help save the desert animals, Widmar said. “Wildlife appears around them,” he said. “You can be a safe haven.”

First Solar has posted losses for five of the last 10 years but has been profitable since 2020.

First Solar expects its Ohio power plants, including this one in Walbridge, to produce panels that could produce 6 gigawatts of electricity annually by 2025.

The highly automated new factory will employ 500 people. First Solar currently has approximately 1,600 employees in the US and 5,000 worldwide.

Nonetheless, First Solar remains a relatively small player in the expanding US market, where imports have an 85% share, according to energy consultancy Wood Mackenzie.

After building the new First Solar factory, the company would still import 40% of its modules from its factories in Vietnam and Malaysia.

Widmar said the company plans to continue expanding US manufacturing to save freight costs and strengthen the company’s reputation as an alternative to Chinese imports.

“We are the only ones who can withstand the onslaught of the Chinese,” said Widmar. “Many people doubt that we can hold out; That is the challenge. “

The company is counting on continued US support through tax breaks and possibly an extension of tariffs on imported Chinese panels, as well as growing domestic demand.

According to Scott Sklar, an energy expert at George Washington University, solar production grew from 0.1% in 2010 to about 4.3% of the nation’s electricity supply.

Investors are investing more money than ever in renewable energies such as sun and wind. WSJ examines how the pandemic, lower energy costs, and global politics drove the rally – and whether it can last. (Video from 12/31/20)

More coverage of the solar industry, selected by the editorial team.

Do Solar Panels Work When It Snows?